Just call them GOATs: Diana Taurasi and Sue Bird made history on Saturday night as the only basketball players ever to win five Olympic gold medals when the Americans secured their place on top of the podium by beating Japan 90-75.

“It’s been a tremendous journey,” Taurasi said, according to ESPN. “It’s 20 years of sacrifice, of putting everything else aside and just wanting to win. It’s never easy playing on this team, the pressure, but this group found a way to win, and I am just happy that this group got to enjoy it.”

Taurasi, 39, and Bird, 40, made their Olympic debut together nearly two decades ago, at the 2004 Games in Athens. They’ve played in every Summer Olympics since and have won all 38 of the games at the Olympics they’ve competed in, the Associated Press reports.

Along the way, the two have etched their names into various history books. Bird, for example, is the most decorated FIBA World Cup athlete in history—male or female—owning four gold medals and one bronze, Team USA reports. She is also the only five-time FIBA World Cup medalist. Taurasi, for her part, holds the U.S. Olympic single-game records for three-pointers made (six) and attempted (10), both of which came in a 2016 game against Serbia, according to Team USA. And in June, she became the first WNBA player to reach 9,000 career points, further cementing her status as the all-time leading scorer in the league’s history.

Both Bird and Taurasi’s legacies extend beyond the court. Earlier this year, Bird launched the digital media company Togethxr along with fellow Olympians Alex Morgan, Simone Manuel, and Chloe Kim. The company aims for more inclusive storytelling in sport and greater coverage of the next generation of female athletes.

“The four of us—myself, Alex, Simone, and Chloe—we saw a need for this in the media world,” Bird previously told SELF. “I think we’re getting a lot of amazing stories out, and that was the purpose, to get the stories out that don’t always get the love they deserve.”

Last summer, Bird, Taurasi, and fellow WNBA players rallied behind Georgia Senate candidate Raphael Warnock, after Kelly Loeffler, an incumbent Republican Senator and Atlanta Dream team co-owner, criticized the league’s support of the Black Lives Matter movement, TIME reported. Warnock, who was polling at only 9% at the time, ended up defeating Loeffler in a January runoff election to become Georgia’s first Black senator. The victory made a big impact: It helped flip the Senate, and the next month, Loeffler sold her stake in the Dream, the Washington Post reported.

“We were playing the season for a cause that was bigger than basketball: the Black Lives Matter movement, getting the vote out,” Taurasi told ESPN of the 2020 WNBA season. “We wanted to make sure people knew why we were playing. And it was more than just playing basketball.”

Following the Tokyo Games, Bird, who served as a flag bearer during the opening ceremonies, is retiring from international basketball; Taurasi left the door open that she’ll compete in the 2024 Summer Olympics in Paris, the Associated Press reported. Regardless, the future of American women’s basketball looks bright. Six of the 12 athletes on the gold-medal winning team were Olympic newcomers. And, during Saturday’s game, 30-year-old Brittney Griner earned Team USA 30 points—the most ever in a gold-medal game for an American, besting Lisa Leslie’s record of 29, per ESPN.

“It’s everything we wanted it to be,” player Haleigh Washington said in an emotional interview after the historic win. “The hard work that we put in, the sweat, the tears, the blood—it’s been worth it. And I am so proud to have done it with this group of women. I am so honored.” 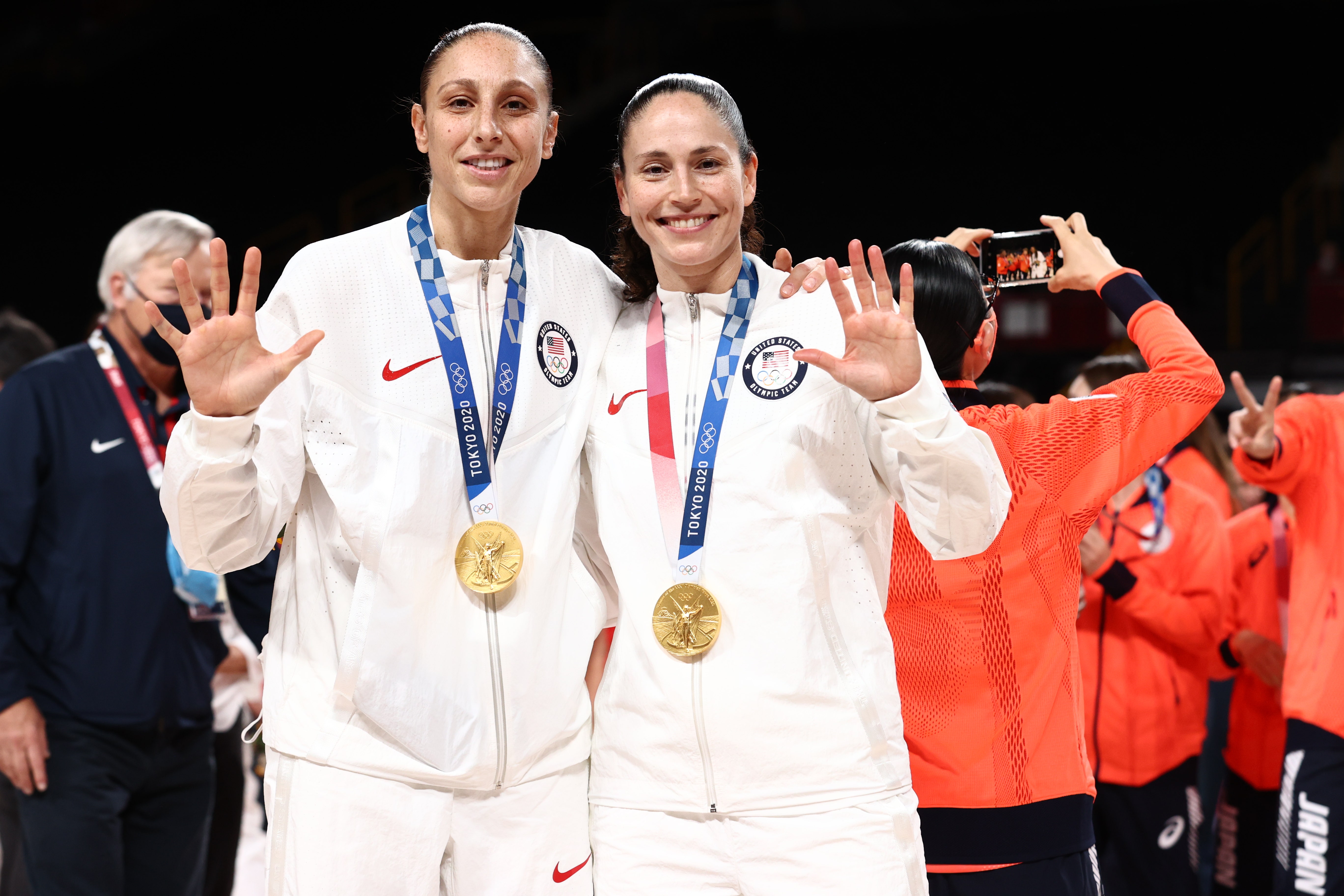 The Safest Way to Travel Right Now, According to 3 COVID-19 Experts

Diana Taurasi and Sue Bird Are Now the Only Basketball Players Ever to Win 5 Olympic Golds Related Posts: