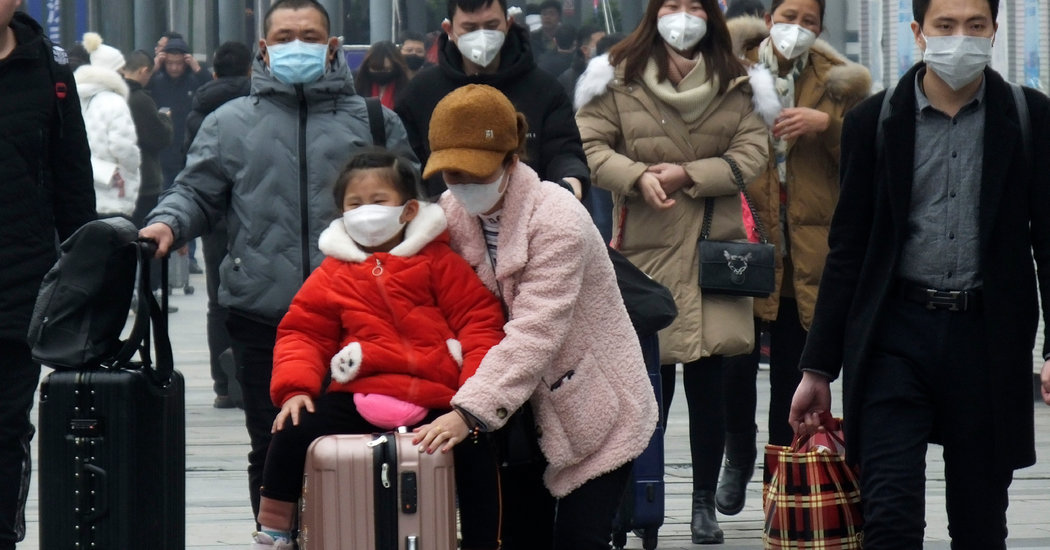 An outbreak of a new coronavirus in China has killed six people and sickened more than 300, and has spread to at least five other countries. The first case outside of Asia was announced on Tuesday, as federal health officials confirmed that a Washington State man who had recently traveled to China had been hospitalized.

Here’s a quick rundown of what we know so far.

What is a coronavirus?

Coronaviruses are named for the spikes that protrude from their membranes, which resemble the sun’s corona. They can infect both animals and people, and cause illnesses of the respiratory tract, ranging from the common cold to severe conditions like SARS, which sickened thousands of people around the world — and killed nearly 800 — during a 2003 outbreak.

How do I know if I’m infected with the new coronavirus?

Symptoms of infection include a high fever, difficulty breathing and lung lesions. Milder cases may resemble the flu or a bad cold, making detection very difficult. The incubation period — the time from exposure to the onset of symptoms — is believed to be about two weeks.

Little is known about who is most at risk. Most of the half-dozen patients who have died also suffered other illnesses.

How was this virus identified?

On Jan. 8, The New York Times reported that Chinese researchers had identified a new coronavirus as the pathogen behind a mysterious illness that had sickened 59 people in Wuhan, a city of 11 million in central China.

The cases were linked to workers at a market that sold live fish, animals and birds. The market was later shut down and disinfected.

The number of human infections has grown dramatically, to more than 300 in China, and cases have now been confirmed in Taiwan, Japan, Thailand and South Korea. The six people who have died from the illness were in Wuhan, and many of the others infected had lived in or traveled there.

On Tuesday, health officials announced the first case outside of Asia. They said the infected man, a resident of Snohomish County, Wash., had recently traveled in the Wuhan region.

[Read about the American patient diagnosed with a coronavirus infection.]

A day earlier, a top Chinese scientist said that the coronavirus was capable of spreading from person to person, adding to fears of a broader epidemic. The Chinese government warned that anyone who hides infections will be “forever nailed to history’s pillar of shame.”

The World Health Organization has called a meeting on Wednesday to decide whether to declare the coronavirus outbreak an international health emergency.

What is the source of the outbreak?

Animals are the most likely primary source of the outbreak — but it is not clear which animals. Past outbreaks of similar illnesses, including SARS, were also believed to have emerged from live animal markets. Another coronavirus, MERS, is transmitted to humans by camels.

What can people do to protect themselves?

Dr. William Schaffner, professor of preventive medicine and infectious diseases at Vanderbilt University Medical Center, said that travelers to China should “absolutely” avoid live animal markets, and keep their distance from any animals in rural areas. He reiterated that travelers should practice “good hand hygiene,” and try to avoid anyone coughing and sneezing.

https://www.nytimes.com/2020/01/21/health/what-is-coronavirus.html, GO TO SAUBIO DIGITAL FOR MORE ANSWERS AND INFORMATION ON ANY TOPIC

What We Know About the Wuhan Coronavirus

17 of the Best Vegan Protein Sources

3 Steps to Refining Your Business

What We Know About the Wuhan Coronavirus Related Posts: