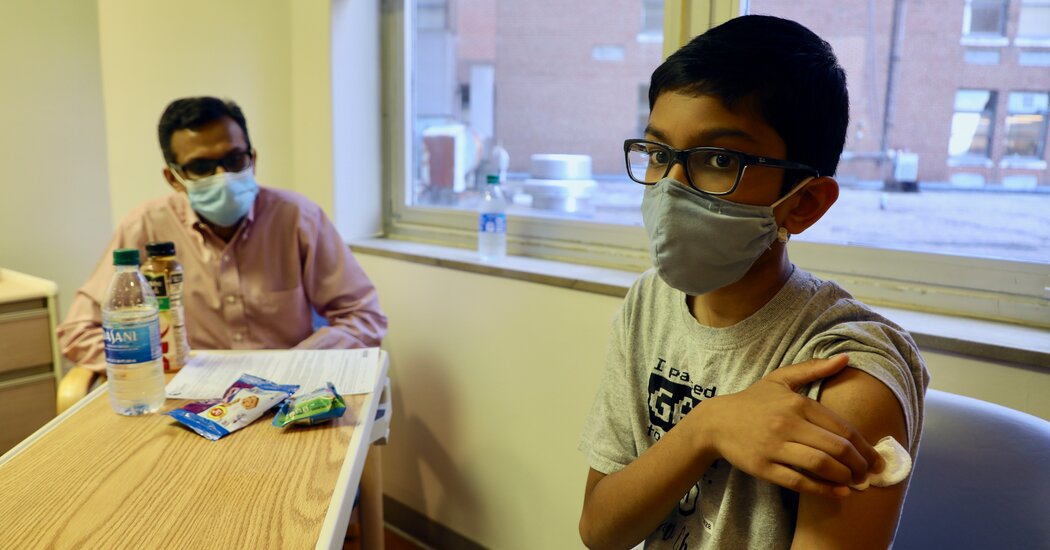 The Pfizer-BioNTech coronavirus vaccine is extremely effective in adolescents 12 to 15 years old, perhaps even more so than in adults, the companies reported on Wednesday. No infections were found among children who received the vaccine in a recent clinical trial, the drug makers said; the children produced strong antibody responses and experienced no serious side effects.

The findings, if they hold up, may speed a return to normalcy for millions of American families. Depending on regulatory approval, vaccinations could begin before the start of the next academic year for middle school and high school students, and for elementary school children not long after.

The companies announced the results in a news release that did not include detailed data from the trial, which has not yet been peer-reviewed nor published in a scientific journal. Still, the news drew praise and excitement from experts.

“Oh my god, I’m so happy to see this — this is amazing,” said Akiko Iwasaki, an immunologist at Yale University. If the vaccines’s performance in adults was A-plus, the results in children were “A-plus-plus.”

The good news arrives even as the country records another rise in infections and health officials renew calls for Americans to heed precautions and get vaccinated. On Monday, Dr. Rochelle Walensky, director of the Centers for Disease Control and Prevention, said that rising cases had left her with sense of “impending doom,” while President Biden called on state and local officials to reinstate mask mandates.

Vaccination efforts are accelerating throughout the nation. As of Tuesday, 29 percent of adults had received at least one dose of a coronavirus vaccine, and 16 percent had been fully inoculated, according to the C.D.C.

But the country cannot hope to reach herd immunity — the point at which immunity becomes so widespread that the coronavirus slows its crawl through the population — without also inoculating the youngest Americans, some experts say. Children under 18 account for about 23 percent of the population in the United States.

“The sooner that we can get vaccines into as many people as possible, regardless of their age, the sooner we will be able to really feel like we’re ending this pandemic for good,” said Angela Rasmussen, a virologist affiliated with Georgetown University in Washington.

Data from Israel suggest that vaccinating adults alone can significantly decrease the number of cases, but “long term, to hit the herd immunity threshold, we will have to vaccinate children,” she said.

The trial included 2,260 adolescents ages 12 to 15. The children received two doses of the vaccine three weeks apart — the same amounts and schedule used for adults — or a placebo of saltwater.

The researchers recorded 18 cases of coronavirus infection in the placebo group, and none among the children who received the vaccine. Still, the low number of infections makes it difficult to be too specific about the vaccine’s efficacy in the population at large, Dr. Rasmussen said.

“But obviously, it looks good for the vaccine if there were zero Covid cases among the vaccinated people,” she added.

The adolescents who got the vaccine produced much higher levels of antibodies on average, compared with participants 16 to 25 years of age in an earlier trial. The children experienced the same minor side effects as older participants, although the companies declined to be more specific.

Dr. Iwasaki said she had expected antibody levels in adolescents to be comparable to those in young adults. “But they’re getting even better levels from the vaccines,” she said. “That’s really incredible.”

She and other experts cautioned that the vaccine might be less effective in children, and adults, against some of the variants that have begun circulating in the United States.

Pfizer and BioNTech have begun a clinical trial of the vaccine in children under 12 and started inoculations of children ages 5 to 11 just last week. Company scientists plan to start testing the vaccine next week in even younger children, ages 2 to 5, followed by trials in children ages 6 months to 2 years.

Results from that three-phase trial are expected in the second half of the year, and the companies hope to make the vaccine available for children under 12 early next year.

“We share the urgency to expand the use of our vaccine to additional populations and are encouraged by the clinical trial data from adolescents between the ages of 12 and 15,” Albert Bourla, Pfizer’s chairman and chief executive officer, said in a statement.

Moderna has also been testing its vaccine in children. Results from a trial in adolescents ages 12 to 17 are expected in the next few weeks and in children 6 months to 12 years old in the second half of this year.

Some parents have said they are reluctant to immunize their children because the risk posed by the virus is low. Children make up fewer than 1 percent of deaths from Covid-19, but about 2 percent of children who get the illness require hospital care.

The new results may not sway all of those parents, but they may reassure parents who have been wary of the vaccines, said Jennifer Nuzzo, an epidemiologist at the Johns Hopkins Center for Health Security.

“While I don’t think we have to wait until children are vaccinated to fully reopen schools, being able to vaccinate children may help some families feel safer about returning to school,” she said.

Pfizer and BioNTech plan to request from the Food and Drug Administration an amendment to the emergency use authorization for their vaccine, in hopes of beginning immunizations of older children before the start of the next school year. The companies also are planning to submit their data for peer review and publication in a scientific journal.

They will monitor the participants for two years after the second dose to assess the vaccine’s long-term safety and efficacy. Side effects of vaccines are usually apparent within the first six weeks, said Dr. Kristin Oliver, a pediatrician and vaccine expert at Mount Sinai Hospital in New York. “Still, it’s good to know that safety monitoring is going to continue,” she said.

The C.D.C. recommends that people avoid getting other vaccines for two weeks before and after receiving the two doses of the coronavirus vaccine.

But children receive more vaccines in the few weeks before the school year than at any other time, Dr. Oliver noted, so pediatricians and parents should aim to get those other immunizations done earlier than usual.

The coronavirus vaccines should ideally be given by pediatricians who have deep experience in immunizing children, Dr. Oliver added. “Now is the time to start planning how that rollout is going to take place in this age group,” she said.

https://www.nytimes.com/2021/03/31/health/pfizer-biontech-vaccine-adolescents.html, GO TO SAUBIO DIGITAL FOR MORE ANSWERS AND INFORMATION ON ANY TOPIC

Is Your Blood Sugar Undermining Your Workouts?

Examining The Frontrunners For The 2021 Heisman Trophy Race

The Pfizer-BioNTech Vaccine Is Said to Be Powerfully Protective in Adolescents Related Posts: