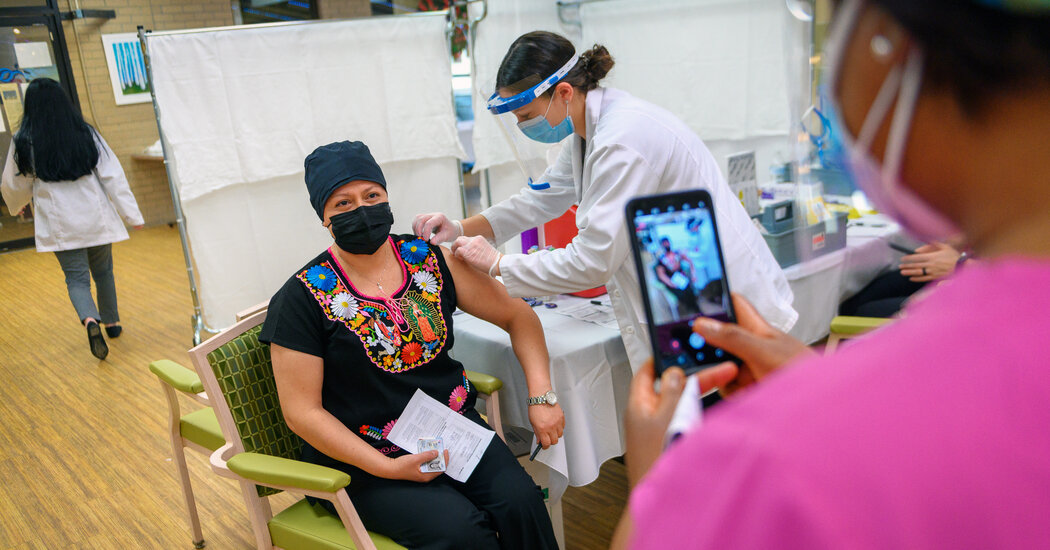 Marita Smith runs a nursing home in Seattle, while Janet Snipes manages one in Denver. They share years of experience in the industry and painful memories of Covid-19, but have sharply differing views of a new federal policy that will mandate vaccinations for all nursing home employees.

In Ms. Smith’s view, unvaccinated people should not be caring for a vulnerable population already hit hard by the pandemic. The industry is again experiencing rising infection rates and deaths among residents, although none approaching the peak figures of last year, and the mandate is intended to head off another surge.

“It’s great,” said Ms. Smith, administrator at St. Anne Nursing and Rehab Center, calling the policy a “pretty big deal” that would “flush out health care professionals who shouldn’t be in health care.”

Such departures are precisely what worry Ms. Snipes, executive director of Holly Heights Care Center in Denver. She, too, wants to see all nursing home workers vaccinated, but not at the risk of losing employees who won’t comply, amid a labor shortage in an industry with an already high turnover rate.

Of the 1.5 million nursing home staff in the United States, some 540,000 — 40 percent of the work force — are unvaccinated. Their fate could be directly impacted by a policy announced Wednesday by President Biden requiring all nursing home employees to be vaccinated, with the rules likely to take effect sometime in September. Facilities that fail to meet that target could face fines or lose eligibility to receive federal reimbursement, a vital source of income for many.

The practical effect of the policy is that workers will have to be vaccinated or lose their jobs. Ms. Snipes said several employees had told her that they might leave. One, whom she described as her best nurse, told her she was “very, very afraid” of the vaccine, in part because she is Black and concerned about medical experimentation of the past.

Getting vaccinated “is the safest thing for our residents and our staff, but we feel strongly he needs to mandate for all health care settings,” Ms. Snipes said of President Biden. “We can’t afford to lose staff to hospitals and assisted living facilities.”

Several major nursing home chains, and some states, have already imposed vaccine mandates. Industry officials said inoculations were strongly advised, but their position on the new policy echoed that of Ms. Snipes.

“We will lose tens of thousands, maybe hundred thousands, of workers,” said Mark Parkinson, president and chief executive of the American Health Care Association, a major nursing home trade group. He said he was hoping for policy modifications and had already spoken about them to Dr. Lee A. Fleisher, chief medical officer of the Centers for Medicare & Medicaid Services, and was seeking a meeting with Xavier Becerra, the secretary of health and human services.

The chief change sought by the industry is a signal from the administration that a mandate will eventually apply across all health care settings, so that nursing home employees recognize that there is nowhere else to go. “Mandate it for everybody,” Mr. Parkinson said.

Dr. Fleisher said that the C.M.S. and the Centers for Disease Control and Prevention had seen in recent data a relationship between rising infections at nursing homes and unvaccinated staff.

Currently, 60 percent of nursing home staff nationwide are vaccinated, far below the industry’s earlier goal of 75 percent by the end of June.

Mr. Parkinson said the industry also was lobbying the government to start “a much more intense media campaign to influence workers” that vaccines are safe and effective. The trade organization also wants the government to create a grace period for hesitant staff.

Dr. Joshua Uy, a geriatrician and medical director of a nursing home in Philadelphia, said he had already seen the staffing challenges and was “ecstatic about the mandate.”

“I am exhausted,” he said. “The vaccine is like a mini fortress around the most vulnerable, where even though there is a fire raging outside, those inside stay safe.”

The mandate aims to avoid a surge in Covid cases and deaths in a highly vulnerable population.

Understand the State of Vaccine and Mask Mandates in the U.S.

And a recent C.D.C. study at 4,000 nursing homes found that the effectiveness of the Pfizer and Moderna vaccines among nursing home residents dropped from 75 percent in the spring to 53 percent by midsummer, as the Delta variant became more widespread. “The findings highlight the critical importance of Covid-19 vaccination of staff members, residents, and visitors,” the study’s authors noted.

Public health experts are concerned that unvaccinated employees could bring Covid-19 into a nursing home and infect residents. More than 80 percent of nursing home residents nationwide are vaccinated, but already cases are rising in this population. In the week ending Aug. 15, 354 nursing home residents died with Covid-19, the highest figure since mid-March, and 3,585 tested positive, according to the C.D.C.

More staff members are getting sick too, the C.D.C. has found. The week ending Aug. 15 saw 5,810 nursing home employees ill with Covid-19, five times higher than a month earlier, and 25 staff members died.

Earlier this month, Good Samaritan Society, which operates 142 nursing homes nationwide, announced that all 15,000 staff members must be vaccinated by Nov. 1 — a position the company took after seeing a rise in resident infections in homes where unvaccinated staff also tested positive. So far, staffing levels have remained steady, said Randy Bury, the company’s chief executive, who has argued in the past that such mandates would create safe, desirable workplaces.

But he argued that the Biden administration’s new policy was misguided unless it was applied across the whole health care sector. “What’s the difference in a long-term care facility or in a hospital?” Mr. Bury said. “They’re susceptible to the virus if they come in contact with unvaccinated staff.”

LeadingAge, a nonprofit representing 2,000 nursing homes, and which had previously called for mandates at individual homes, criticized the Biden policy for its narrow focus.

“The administration is right,” Katie Smith Sloan, president and chief executive of LeadingAge, said in a published statement. “We are on wartime footing. Defunding the care providers who continue to fight on the front lines would be a tragic misstep.”

Ms. Snipes, the director of Holly Heights in Denver, said she has spent months trying to educate the staff and encourage vaccination. She said that most of her unvaccinated employees had agreed to obey the mandate, but she mentioned three whom she feared might leave. One told her that said she did not want to put anything foreign in her body. A second, who was Catholic, said he did not want an mRNA vaccine on religious grounds, and he had a letter of support from his bishop.

The third was the Black nurse who “of all the people I’ve spoken to sounds the most afraid,” Ms. Snipes said. “I want to save her as an employee.”

https://www.nytimes.com/2021/08/19/health/coronavirus-nursing-homes-vaccination.html, GO TO SAUBIO DIGITAL FOR MORE ANSWERS AND INFORMATION ON ANY TOPIC