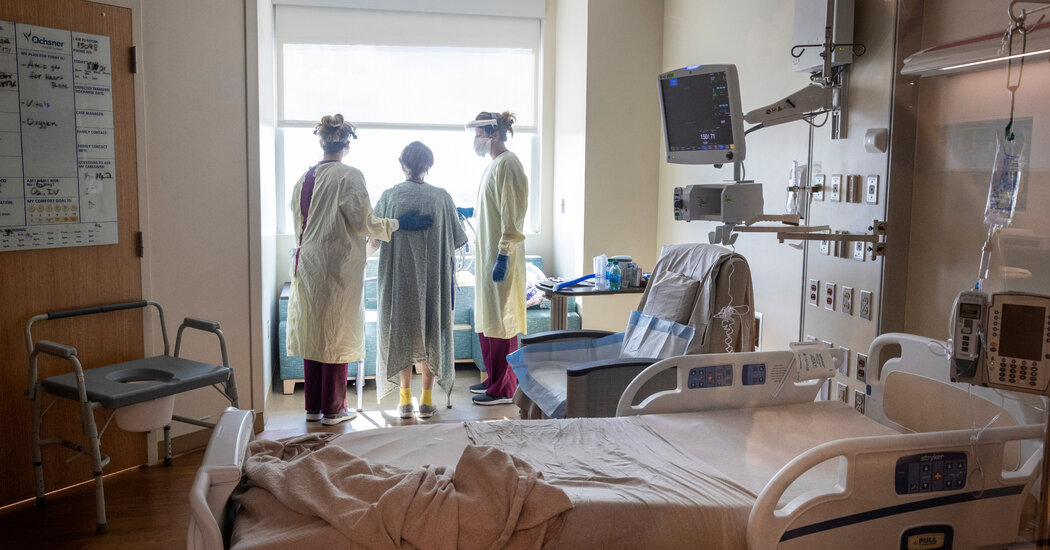 Since Americans first began rolling up their sleeves for coronavirus vaccines, health officials have said that those who are immunized are very unlikely to become infected, or to suffer serious illness or death. But preliminary data from seven states hint that the arrival of the Delta variant in July may have altered the calculus.

Breakthrough infections in vaccinated people accounted for at least one in five newly diagnosed cases in six of these states and higher percentages of total hospitalizations and deaths than had been previously observed in all of them, according to figures gathered by The New York Times.

The absolute numbers remain very low, however, and there is little doubt that the vaccines remain powerfully protective. This continues to be “a pandemic of the unvaccinated,” as federal health officials have often said.

Still, the rise indicates a change in how vaccinated Americans might regard their risks.

“Remember when the early vaccine studies came out, it was like nobody gets hospitalized, nobody dies,” said Dr. Robert Wachter, chairman of the department of medicine at the University of California, San Francisco. “That clearly is not true.”

The figures lend support to the view, widely held by officials in the Biden administration, that some Americans may benefit from booster shots in the coming months. Federal officials plan to authorize additional shots as early as mid-September, although it is not clear who will receive them.

“If the chances of a breakthrough infection have gone up considerably, and I think the evidence is clear that they have, and the level of protection against severe illness is no longer as robust as it was, I think the case for boosters goes up pretty quickly,” Dr. Wachter said.

The seven states — California, Colorado, Massachusetts, Oregon, Utah, Vermont and Virginia — were examined because they are keeping the most detailed data. It is not certain that the trends in these states hold throughout the country.

In any event, scientists have always expected that as the population of vaccinated people grows, they will be represented more frequently in tallies of the severely ill and dead.

“We don’t want to dilute the message that the vaccine is tremendously successful and protective, more so than we ever hoped initially,” said Dr. Scott Dryden-Peterson, an infectious disease physician and epidemiologist at Brigham & Women’s Hospital in Boston.

“The fact that we’re seeing breakthrough cases and breakthrough hospitalizations and deaths doesn’t diminish that it still saves many people’s lives,” he added.

The C.D.C. declined to comment on the states’ numbers. The agency is expected to discuss breakthrough infections, hospitalizations and vaccine efficacy at a news briefing on Wednesday.

The states’ data do affirm that vaccinated people are far less likely to become severely ill or to die from Covid-19. In California, for example, the 1,615 hospitalizations of people with breakthrough infections as of Aug. 8 represents just 0.007 percent of nearly 22 million fully immunized residents, and breakthrough deaths an even smaller percentage.

But in six of the states, breakthrough infections accounted for 18 percent to 28 percent of recorded cases in recent weeks. (In Virginia, the outlier, 6.4 percent of the cases were in vaccinated people.) These numbers are likely to be underestimates, because most fully immunized people who become infected may not be taking careful precautions, or may not feel ill enough to seek a test.

“There’s just a lot more virus circulating, and there’s something uniquely infectious about the variant,” said Natalie Dean, a biostatistician at Emory University in Atlanta.

Breakthrough infections accounted for 12 percent to 24 percent of Covid-related hospitalizations in the states, The Times found. The number of deaths was small, so the proportion among vaccinated people is too variable to be useful, although it does appear to be higher than the C.D.C. estimate of 0.5 percent.

If breakthrough infections are becoming common, “it’s also going to demonstrate how well these vaccines are working, and that they’re preventing hospitalization and death, which is really what we asked our vaccines to do,” said Anne Rimoin, an epidemiologist at the University of California, Los Angeles.

A vast majority of vaccinated people who are hospitalized for Covid-19 are likely to be older adults or those who have weakened immune systems for other reasons. C.D.C. data show that 74 percent of breakthrough cases are among adults 65 or older.

Most states do not compile the numbers by age, sex or the presence of other conditions. But in Oregon, which does, the median age for a breakthrough-associated death is 83 years.

The numbers suggest that people who are at higher risk for complications from Covid-19, and anyone who lives with someone in that group, “really needs to seriously consider the risks that they’re taking now,” said Dr. Dean Sidelinger, a state epidemiologist and state health officer for Oregon.

Especially for high-risk groups, “the most important message is that if you do get Covid, then take it seriously,” Dr. Dryden-Petersen said. “Don’t assume that it’s going to be mild. And seek out therapies like monoclonal antibodies if you’re high-risk, to try to prevent the need for hospitalization.”

The figures also underscore the urgency of vaccinating all nursing home residents and staff members.

The states’ numbers come with many caveats. Immunized adults greatly outnumber unvaccinated adults in most states, and their ranks are growing by the day. So the proportional representation of the vaccinated among cases, hospitalizations and deaths would also be expected to rise.

Breakthrough infections are also likely to be most severe among older adults or those who have conditions like obesity or diabetes. These individuals have the highest rates of vaccination, and yet the highest risk of weak or waning immunity.

Their representation among the hospitalized may skew the percentages, making it seem that vaccinated Americans overall are hospitalized more often than is really the case.

Understand the State of Vaccine and Mask Mandates in the U.S.

To draw more direct conclusions about breakthrough infections, she and other experts noted, states would need to collect and report timely and consistent data to the C.D.C.

Instead, each state slices its data set differently, in different time frames, and many still don’t record mild breakthrough cases because of a directive from the C.D.C. in May. “This is a microcosm of the larger challenges that we’ve had getting data together,” Dr. Dean said.

Studies are also needed on how often people with breakthrough infections spread the virus to others, including to unvaccinated children, and how many of them have persistent symptoms for months after the active infection has resolved, Dr. Rimoin said.

Some scientists noted that while the vaccines are highly effective, people ought to be more cautious, including wearing masks in public indoor spaces, than they were earlier this summer. As more vaccinated people comply, the incidence of cases and hospitalizations may decrease.

In the meantime, the trend in breakthrough infections, if it holds up nationwide, is likely to intensify the debate around boosters.

Most experts still say that boosters are unlikely to be needed in the near future for the general population. But a rise in hospitalizations among the vaccinated may indicate that the boosters are required for some high-risk groups.

Data from Israel and from a handful of studies have suggested that immunity to the virus may wane after the first few months in some groups and may need to be supplemented with booster shots.

Among vaccinated Americans, 72 percent of those who are 65 or older already say they want a booster shot, according to one recent survey.

“When boosters become available, barring arguments about ethics about global supply of vaccines, you should go and get a vaccine,” said Dr. Michael Mina, an epidemiologist at the Harvard T.H. Chan School of Public Health.

Ideally, Dr. Mina said, doctors would track their patients’ antibody levels over time to assess who needed a booster shot, much as they do for measles and rubella vaccines in health care workers. But the C.D.C. and the Food and Drug Administration have said that available antibody tests are not accurate enough for that purpose.

Dr. Dryden-Peterson said it was hard for him to reconcile the idea of boosters for Americans with his work in Botswana, where vaccines are mostly unavailable.

“Even just one dose helps a lot in terms of preventing death,” he said. “We have done an incomplete job of vaccinating the United States, and that should probably be our focus rather than moving on to boosters.”

https://www.nytimes.com/2021/08/17/health/covid-vaccinated-infections.html, GO TO SAUBIO DIGITAL FOR MORE ANSWERS AND INFORMATION ON ANY TOPIC

Early Data Hints at a Rise in Breakthrough Infections

Boosting Your Dog’s Energy with These Helpful Tips

What Happens When You’re Disabled but Nobody Can Tell

The mental health benefits of volunteering