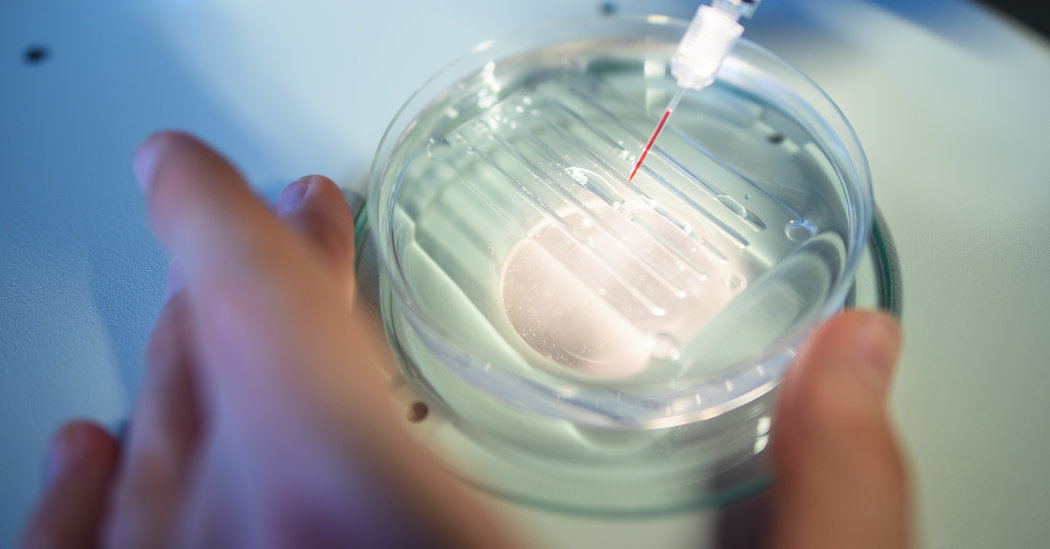 Doctors have for the first time in the United States tested a powerful gene-editing technique in people with cancer.

The test, meant to assess only safety, was a step toward the ultimate goal of editing genes to help a patient’s own immune system to attack cancer. The editing was done by the DNA-snipping tool Crispr.

The procedure was feasible and safe, early results indicate, but whether it is fighting the disease is unclear. Only three patients have been treated so far, and the longest follow-up is nine months. All three patients are in their 60s, with very advanced cancers that had progressed despite standard treatments like surgery, radiation and chemotherapy.

“The good news is that all of them are alive,” said Dr. Edward A. Stadtmauer, the section chief of hematologic malignancies at the University of Pennsylvania Abramson Cancer Center. He added, “The best response we’ve seen so far is stabilization of their disease.”

The research was paid for by the Parker Institute for Cancer Immunotherapy and the company Tmunity. Some members of the research team, but not Dr. Stadtmauer, are equity holders in Tmunity, as is the University of Pennsylvania.

The findings have not yet been published in a medical journal, but will be presented next month at a meeting of the American Society of Hematology, and posted online on Wednesday.

“This is really just the beginning of a whole next generation of treatments,” Dr. Stadtmauer said in an interview.

Researchers hope to use Crispr to treat a number of genetic diseases, and it has already been used experimentally to treat sickle-cell anemia.

Doctors in China say they have already started using Crispr to treat various types of cancer.

Two patients in Dr. Stadtmauer’s study have a blood cancer, multiple myeloma, and the third has a sarcoma, a rare cancer of connective tissue.

The study did not turn Crispr loose inside their bodies. The technology is relatively new, and some researchers fear that it could somehow edit the wrong gene. Instead, doctors removed T-cells, the soldiers of the immune system, from the patients’ blood, and used Crispr to delete three genes that might interfere with the cells’ ability to fight cancer or cause side effects in the patients.

Next, the researchers used a virus to arm the T-cells with what Dr. Stadtmauer called a warhead, which would direct the cells to attack a target called NY-ESO-1, a protein found on cancer cells but rarely on normal tissue. Then, after processing the cells to remove any traces of Crispr, the research team infused the cells — 100 million of them — back into the patients.

“Once we infused these cells, there was anywhere from a 10,000-fold to 100,000-fold increase in the amount of cells growing in the patients, which is exactly what we hoped for,” Dr. Stadtmauer said.

There were no ill effects, he said, and the cells did not die off.

“It’s good to have these cells hanging around doing serial surveillance for tumor,” he said. “We’re happy that up to nine months later we’re still seeing the cells.”

But are the cells fighting cancer? Dr. Stadtmauer said his team was tackling that question now, by mixing altered cells from the patients with cancer cells in petri dishes in the lab, to see if the T-cells kill the malignant ones. He said he expected to have the answer in a month.

The next phases of the study, involving more patients, will give the scientists a better sense of whether the treatment is working. If it is not, Dr. Stadtmauer said, the researchers can try to identify different targets and deploy other warheads.

“It really just opens up a whole world of this type of manipulation of cells to be directed to whatever the imagination can think of,” he said.

Before the end of the year, he said, more patients will be receiving Crispr-treated cells for leukemia.

The work builds on earlier research at the University of Pennsylvania, led by Dr. Carl June, who was also part of the team conducting the new Crispr research. The earlier work developed CAR-T cells, which wiped out leukemia in a critically ill child, Emily Whitehead, in 2012 and became the first therapy using genetically altered cells to be approved by the Food and Drug Administration for leukemia and lymphoma, in 2017.

Dr. Stadtmauer called the results of that treatment “amazing,” but said it had limitations that the new Crispr work is trying to overcome.

“Even in the best case scenario with leukemia, 80 percent respond, and two thirds of those are doing well,” he said. “With lymphoma, half respond, and half of those do well. So there is still more to be done to improve this approach.”

https://www.nytimes.com/2019/11/06/health/crispr-cancer-leukemia.html, GO TO SAUBIO DIGITAL FOR MORE ANSWERS AND INFORMATION ON ANY TOPIC

Tips to Create the Tidiest Home Ever

6 Items to Sleep Well (or at Least Better) While Traveling