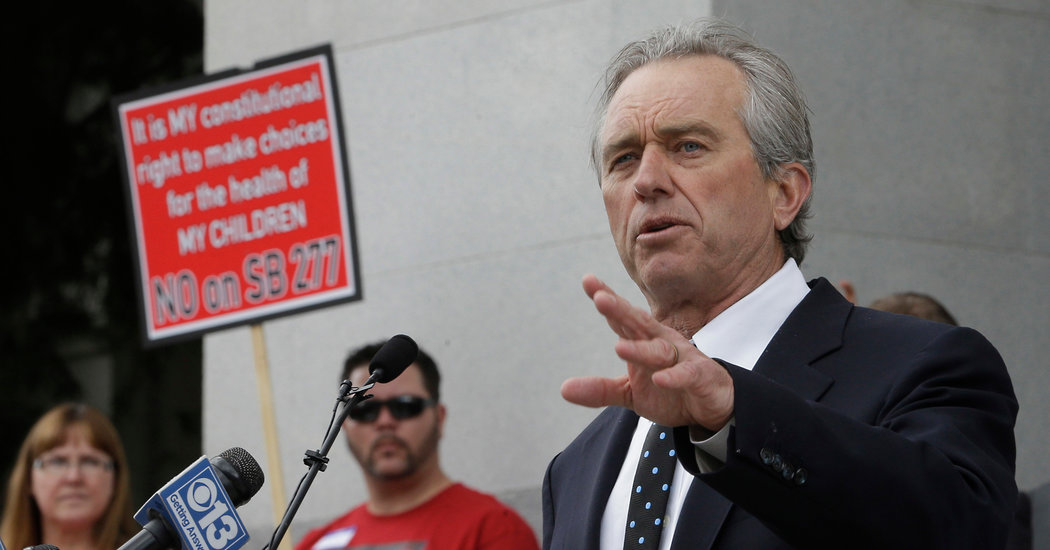 A brother, sister and niece of Robert F. Kennedy Jr. on Wednesday chastised him for campaigning against vaccines, saying he has been disseminating “dangerous misinformation” that discourages immunization even as measles spreads throughout the United States.

They declared that they love him and praised his work to protect the environment. “However, on vaccines he is wrong,” they wrote in a column published in Politico under the headline “RFK Jr. Is Our Brother and Uncle. He’s Tragically Wrong About Vaccines.”

Mr. Kennedy, an attorney, author and environmental activist, said in a statement: “I am not anti vaccine. I want safe vaccines with robust safety testing.”

Mr. Kennedy is chairman of the board of Children’s Health Defense. Its website ties the increase in chronic childhood conditions such as asthma, autism and diabetes to a range of factors, including environmental toxins, pesticides and vaccines.

The group links to information and videos that blame vaccines for food allergies, claim that vaccines against diphtheria, pertussis and tetanus are killing people, and charge that media coverage of the current measles outbreak has been “orchestrated” by the World Health Organization.

In their column, Mr. Kennedy’s relatives took a tempered tone for the most part, but noted that researchers have concluded there is no link between vaccines and autism, and that their family has had a longstanding commitment to vaccination as a critical tool for improving public health.

They pointed out that President John F. Kennedy in 1961 urged Americans to take advantage of a new “miraculous” polio vaccine; in 1962, he signed the Vaccination Assistance Act to help ensure all American children were immunized.

“On this issue, Bobby is an outlier in the Kennedy family,” they wrote.

The United States is now experiencing the worst measles outbreak since the disease was declared eliminated in the United States in 2000. As of Monday, 764 cases had been identified in 23 states, most of them in people who were never vaccinated.

Government health officials have made an urgent plea to parents to vaccinate their children if they have not already done so, and they are urging Americans to be immunized before traveling overseas.

Mr. Kennedy’s relatives wrote that his anti-vaccine messages are having “heartbreaking,” and even deadly, consequences.

https://www.nytimes.com/2019/05/08/health/vaccines-kennedy-measles.html, GO TO SAUBIO DIGITAL FOR MORE ANSWERS AND INFORMATION ON ANY TOPIC

Brother and Sister of Robert F. Kennedy Jr. Accuse Him of Spreading Misinformation on Vaccines

Navajo Nation Coronavirus Crisis: A Day in the Life of This Doctor

Eating Fish May Protect the Brain From Pollutants