How’s your August so far? For Sydney McLaughlin, the month has been a bit, um, busy.

The American track phenom dominated her events at the 2020 Tokyo Olympics, earning gold in the highly anticipated 400-meter hurdles and shattering her own world record in the process. She also nabbed gold in the 4x400-meter relay, running on a team with legend Allyson Felix, who, as a result of that win, became the most decorated American track and field Olympian of all time. Shortly after, McLaughlin, who turned 22 the day of the relay finals, flew from Tokyo to Los Angeles, and then traveled to Palm Springs, where she’s been decompressing and spending time with family.

“It was just such an amazing experience,” a still jet-lagged McLaughlin tells SELF of her whirlwind Olympic journey. “I think I’m still unpacking everything that’s happened.”

In sharing initial reflections on the record-breaking hurdles race, McLaughlin says she felt an immense release of pressure the moment she realized she’d clinched gold.

“When you get to the highest stage, there's a lot of expectation on you,” explains McLaughlin, who faced fierce competition in the race from teammate and former world-record holder Dalilah Muhammad. “Once I crossed the line, I felt a sense of relief, because that's what we—my coach, and I—had been training for all year.” McLaughlin’s coach is Bob Kersee, who also coaches Felix and previously coached Olympic legends Jackie Joyner-Kersee (his wife) and the late Florence Griffith Joyner (a.k.a. FloJo, his sister-in-law), among other elites.

As for the history-making relay, “I was just really excited to be a part of it,” says McLaughlin, who led off the team with a speedy time of 50.21 seconds. “It was Allyson [Felix]’s last Olympic race and it was really an honor to literally hand off the baton to her and just be a part of another gold-medal performance.”

McLaughlin still isn’t sure where she’s going to store her medals—”I don’t want them to get messed up at all”—and also can’t yet say what she and Kersee will focus on, training-wise, next season. For now her main priority is simply “enjoying vacation.”

In the meantime, however, the busy month continues: Today marks the launch of the New Balance x Sydney Signature Collection, a footwear and apparel collection inspired by McLaughlin’s evolution from a young track athlete in New Jersey to a two-time Olympian (McLaughlin competed in the 2016 Rio Games as a 17-year-old), two-time Olympic gold medalist, and world-record holder.

The main message behind the collection is “Be the first you,” says McLaughlin, who signed with New Balance in 2018 and helped design, fit, and style the signature line. “It’s the idea of understanding that there's never going to be anybody else like you, so encouraging people to step into that and embrace who they are in a way that nobody else will ever be able to duplicate.”

The line—an athleticwear-meets-fashion collection of crop tops, sports bras, tights, hoodies, shoes, and accessories—is “a depiction of my own personal style and things that I like to wear.” And wearing cute attire makes a big difference for McLaughlin: “If I look good, I feel good, and then I do good.”

SELF got a first look at the new collection, and here are a few of our—and McLaughlin’s—favorite pieces.

Shop the New Balance x Sydney Signature Collection at www.newbalance.com and Amazon.com for a limited time. 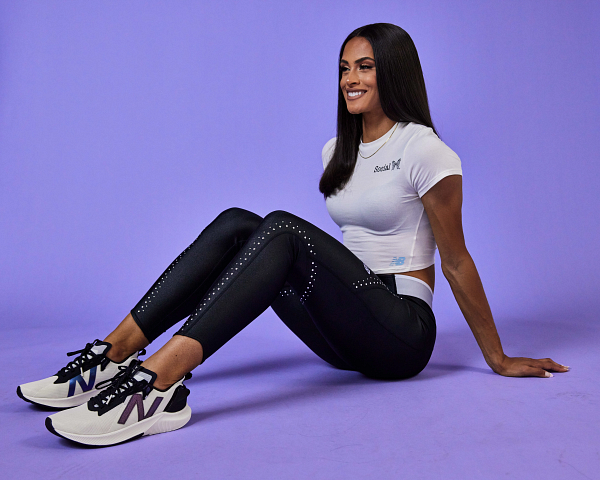 My 3-Year-Old Can Tell I’m Depressed

This Low-Impact Bodyweight Workout Will Leave You Breathless